Agnes finding herself suddenly bereft, also found that she was out of a place to live. The conditions of employment were that if one partner died the other had to go. She was not one to lay down and confronted the Board of Guardians but to no avail.

It did not help that Alex’s plan for retirement at Delaford, on a large farm, had fallen through. There had been some misunderstanding about a lease on the property and before he could buy it, the land returned back to its original owner. He had also lent money “on a handshake” and Agnes was only able to get half of it back. One who refused to pay was her own brother-in-law.

Agnes lived a full life and met challenges head on. She died in 1963 at the age of 102 years and is at rest with her husband in Mount Jerome cemetery, Dublin. The rather plain headstone says “Till He Comes”. 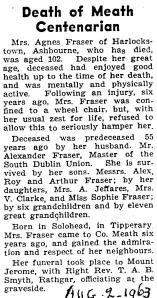