While Richelieu toiled away in the country, Henry IV, the first Bourbon king, continued his life of warring, over-indulging and taking mistresses until “the madman Reveillac” caught up with him as he was riding through Paris in a coach. Henry, who had become somewhat paranoiac, was in a deep depression at the time, even sensing his impending death. As the coach rolled along Ravaillac a deranged religious fanatic, jumped onto the coach, reached inside and stabbed him twice. All France mourned “le Vert Galant”,  the king who walked among his people. The year was 1610.

This left Louis (XIII), though not his father’s favorite, next in the line for the throne. Since he was only 8 years old at the time, his mother, the infamous Marie de Medici became regent. As with most royal marriages of the time, it was one of expediency and not love. Henry was known to have had 60 mistresses, many of whom’s children were raised as one at St. Germaine en Laye.  Marie was daughter of the Grand Duke of Tuscany, Francesco de Medici and Joanna,  Archduchess of Austria. This made Marie part Hapsburg. The Hapsburg empire was an ever-encroaching threat on France’s borders and was home to many Protestant nobles. Couple this with her personality, which was said to be over-bearing and unintelligent and she became very suspect to the people. 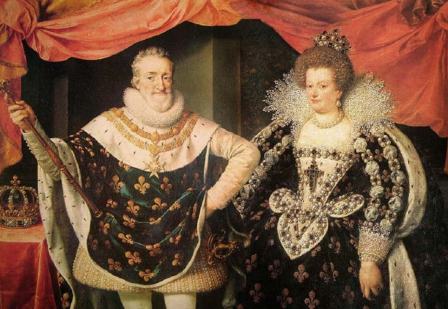 Eventually, Marie made one mistake too many when she decided Louis would marry Anne of Austria and her daughter, Elisabeth would marry Phillip IV of Spain, both countries a threat to France. After leading a rebellion of nobles against her, the ultra-Catholic, Prince de Conde, forced a treaty with her which included a meeting of the Estates General, an assembly of the 3 levels of French society, the clergy, the nobility and the commoners or  Third Estate.  The Estates General (États-Généraux) started as an advisory counsel to the King as far back as the 13th century but never became an actual institution. At this meeting,  Conde would purportedly be fighting to free Louis from bad counsel which included Marie’s favorites,  Concino Concini and his wife, Leonora Galigaii.  That being said,  it was also an opportunity to bully her into rescinding the reduction of the noble’s stipends.

While the noble’s returned to their province’s to arm themselves, officials began looking for people to represent their section of the estates. Like today, the common people were represented by privileged civil servants such as lawyers, except in this case, their positions could be purchased. Naturally, Conde opposed this along with the clergy. The Third Estate, complained about their eternal lot of over-burdening tax and the noble’s pension and yet, they believed that royal sovereignty should be upheld.

Within the clergy,  elections were held in which Richelieu remained moderate and with the backing of his supporter, the Bishop of Poitiers,  was chosen to give the closing speech for the clergy at the Estate. He had previously written a letter to Concini declaring his loyalty to the crown . After his speech which included a statement speaking to the toleration of the Protestants as being harmful to the God that had given the King his power, the Queen regent decided to promote him. She was going ahead with the Spanish marriages of her children.

Richelieu was visiting the court when Elisabeth became ill with smallpox. Richelieu was asked to stay behind with her as the wedding party traveled to Bordeaux.  When the two finally caught up with the wedding party, the Queen was impressed enough to reward Richelieu with the position of chaplain to Anne of Austria, Louis’ new wife. In 1616, he sided with the Concini’s that Marie  should not re-appoint her old ministers and was granted the position of Counseillor d’Etat or adviser to the Crown. The dreamed of pied- a -terre suddenly became a reality as Richelieu rose in favor with the royal court and the clergy.

Conde refused to return to court even after the treaty so the Queen sent Richelieu to speak with him.  This brought Conde back but it wasn’t long until he started to cause trouble. He, being second in line to the throne, had a vested interest in stirring up public opinion. After spreading sedition against Concini, he was lured to the court,  arrested and thrown into  the Bastille. The public started to riot at this breach of protocol and sacked Concini’s house. Richelieu was sent to quiet the Duc de Nevers who took up for Conde but with little success. Shortly after, Marie looking for new support, made him secretary of state and then of the military. We now start to see some of Richelieu’s determination and character not to say the least of his energy.

Missives began to fly to all corners of France and Europe committing to a neutral stance on religious politics, commencing his life-long attempts to unite the country. Soon though, things began to get out of control with another military uprising in the northeast. The complaints from nobility remained the same, the Italians at court, lack of funds to the nobility, no response to the issues raised at the Estates General.  This time though, Marie was not to be bought off. She offered her withdrawal from affairs of state but refused Richelieu’s offer. Here too, we see the other side of Richelieu’s character, that chameleon shade as he agrees to keep Louis informed of court activities.

Louis, now almost of age had formed a huge resentment to the treatment of his mother and her favorites. He began secret meetings to discuss the future of Concini and the effect he had on court. He was an insolent, braggart who generally ignored the King. On April 24, 1617 the matter was solved when Concini was mysteriously shot in the courtyard of the Louvre.

What happened next was too extreme to be believed, unless you know of the French standards of the day. Concini was quickly buried  only to be dug up by a mob and his body dragged through the streets to the Pont Neuf,  the new bridge so recently built by the late king. There,  after being hung by the feet he was brutally dismembered (genitals cut off among other things), then dragged through the streets and burned. His bones and ashes then thrown into the river.

The Assassination of Contini  1617

It happens that Richelieu was crossing the bridge that day.  By some miracle he was able to cross after shouting his allegiance to the king. There is no need to wonder what could have happened if they had known he had been in  consort with the dead man.