As you know I am an avid history reader and have just finished Cardinal de Richelieu by Eleanor C. Price. At the same time I have been following the new series “Musketeers”. Of course, everyone knows that the series is a rather creative look at the lives of the Musketeers, Louis XIII and of course Richelieu, played brilliantly by Peter Capaldi.  It is swashbuckling fun. By coincidence, I hit a small section at the end of the book where Ms. Price talks about Richelieu on his death bed.

” Louis XIII, himself too ill and depressed to enjoy his hunting as usual, was pestered by Chavigny and de Noyers with messages from the Eminentissime, insisting on the disgrace of four of his best-liked officers- among whom was M. de Troisville, or Treville, the famous captain of musketeers-whose only crime was that they had formerly been friends of Cinq-Mars, and that Richelieu feared their hatred and their influence. The King resisted long, but at last, by sheer angry obstinacy, the Cardinal gained his point, and the four gentlemen were dismissed from the Court, though not from the army; the King showing “great displeasure, even to shedding of tears”.

Richelieu was anxious to finish off what ever business he had before his death and was at this point demented with pain. Louis himself was ill. At one point, Louis was brought in his bed to Richelieu to discuss the Spanish treaty and the fate of Cinq Mars, a former favorite of the King turned traitor.

A “mousquetaire” of course, was a soldier armed with a musket, in this case, part of the king’s body guards.  I am sure there are much better references for the life of a musketeer and their relationship with the King than Dumas’s novel. It is rather sad to think that all the next generation may know is what they see on TV. My take? Truth is more often stranger than fiction ( and a lot more exciting)! 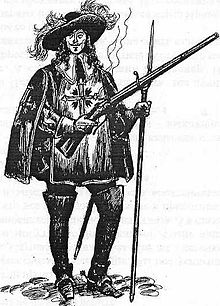