Ironically, just days after the capitulation of La Rochelle, a great storm broke out which destroyed the moles or earthen works Richelieu had built to prevent the British from gaining access to the city.  Crossing the river Loire on his way back to Paris, the Cardinal nearly drowned along with his Chancellor. At the same time, the Duc de Nevers, Charles de Gonzague, was blockaded in at the fortress of Casale in Northern Italy by Spain and Savoy. With the siege over, France would finally be free to come to his aid. 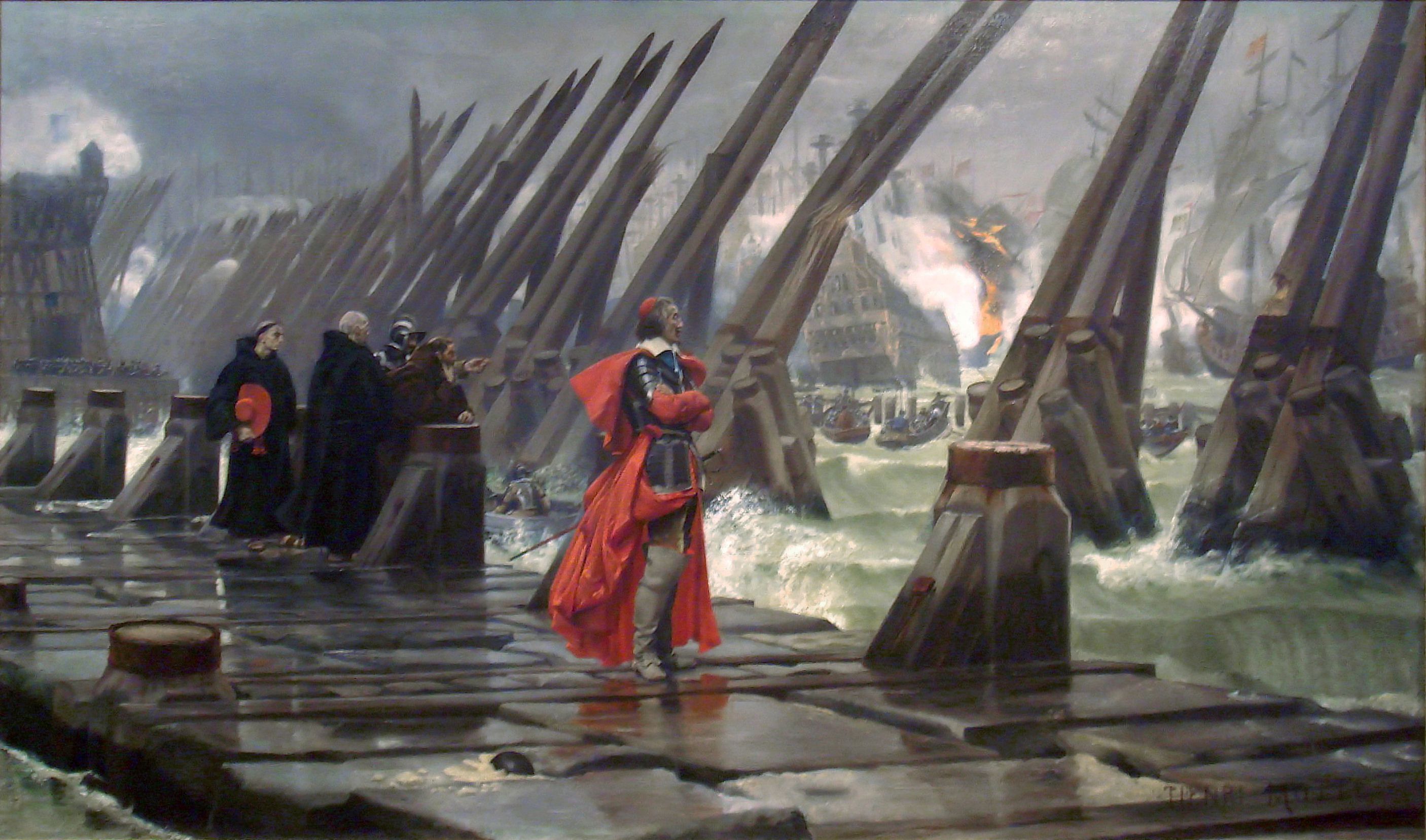 Cardinal Richelieu at the Seige of La Rochelle- Henri Motte

De Gonzague was one of the great nobles of France and would have been heir to the throne of Constantinople. He had been on Crusade with Pere Joseph and was distrusted by the Queen Mother who voiced her displeasure at the thought of the King marching to his aid. This was not to mention the fact that Alphonse, Richelieu’s brother had been made a Cardinal in celebration of the victory against the Huguenots. The rule was that two brothers could not be cardinalized. Then France marched off to war against two Catholic countries, Spain and Austria. The Cardinal maintained his stance that the honour of France was at stake if they did not back the Duc’s right as hereditary ruler of Mantua.  He promised the King that the war in Mantua would be resolved by May so the issue of Rohan and the hold-out Huguenots in Languedoc could be dealt with. Again, Richelieu drew the withdrawal card and once again, Louis promised to support him in his cause. Marie was enraged.

In January, 1629, Louis marched south to join the troops that had only a short rest after La Rochelle. The Cardinal met with Conde to discuss how they would strike a final blow to the Huguenots in Languedoc. Louis decided to continue into Savoyard territory in spite of the wintry weather to capture Susa. It took one month to get to the foot of the Alps and another to scale them. Susa was at the top of a fortified gorge and though others balked at the idea of climbing to the fortress, Louis showing himself as the bold soldier he was climbed through the snow. While he was finding a way up and behind the enemy barricades, the main body of the army drove straight at the enemy. The royal musketeers scaled the walls and drove them back down and towards Susa. After that,  with his usual energy and speed, Richelieu relieved Casale. Below, what Louis XIII may have been looking at as he approached the Alps.

It did not take long to take Languedoc, though Rohan had made an agreement with Spain to keep up the rebellion. The Huguenots did not have a regular army.  The royal army over ran the area, destroying crops and driving the people into the mountains. The small stronghold of Privas  insisted that their commander St. André de Montbrun should make terms with the King but Louis emphatically refused. The surrender must be unconditional. The troops entered and sacked the town during which time a terrible fire broke out.

Louis’ character required him to hang the commander but his hand was stayed by Richlieu. He could be surprisingly humane once he had achieved his goals. Though he was ill at the time, the Cardinal rode to meet the inhabitants and placed twelve young girls in the care of the Dame de Chateau d’Autremont. He was presented with an infant who was found in his dead mother’s arms whom he found a nurse for. He ordered the child be called “Fortunat Privas”. Compared to the other atrocities in Germany through the Thirty Years war, this was quite exceptional.

Areas Involved in the Mantuan War

The King’s army continued to sweep south capturing all the small towns until they came into Nimes where a final victory in the Huguenot war was realized. Richelieu had achieved the first great end of his policy, to subdue internal rebellion and unite France. Once conquered, he offered a general amnesty. The Duc de Rohan retired to Venice as a free man.  Liberty of Conscience as laid out in the Edict of Nantes was reaffirmed but all  Huguenot fortifications had to be razed. All the Protestant towns submitted except for stubborn and determined Montauban. Richelieu was left to deal with this on his own as the King left for Paris. Though ill with fever, he spent weeks arguing with the town deputies until finally they submitted. He entered the town in the middle of August, harangued by the Protestant ministers and stayed long enough to see that the ramparts were being destroyed. He then returned to Paris to face his other enemies, the Queen mother, Marie de Medici and her court,  a court ablaze with resentment and jealousy.