Richelieu’s seeming paranoia continued to rise as he found the members of Louis’ court powerful and independent enough not to come under his influence. They refused to spy for him and saw him as a cruel,  mysterious despot and a threat to their own influence on the King.  Even the King’s own brother could not be trusted. Louis himself was not above listening to the accusations and complaints of his favorites.

Queen Anne, who had been befriended by the Queen Mother early in her marriage, was herself Spanish. That and her inability to provide an heir gave Louis, who was not a naturally warm person, an excuse to ignore her. Of course he had mistresses as all kings had but they were screened by Richelieu with a contract that there would be no physical relations. Louis even fell in love with one of them, Marie de Hautefort, when she came to court as a lady in waiting to Anne. The fact that there could be no relations between them was a scurge to Louis even though the pair frequently argued. Marie, who had a very religious upbringing, soon became close to Anne and refused to become an agent for Richelieu. She was soon replaced by another innocent, Louise de la Fayette, cousin to Richelieu’s closest friend, Pere Joseph.

Louise however, was well under the influence of Pere Caussin, the royal confessor and her uncle the Bishop of Limoge. It was just possible that she would try to turn Louis’ head against Richelieu. She sought advise from Pere Carré, advisor to the court ladies and Superior of the Dominicans in Paris. Naturally, he advised life in the convent. Pere Caussin, on the other hand asked why she should give up her friendship with Louis for an imagined vocation as a nun. In this he backed most of the court.  Very soon he found himself disgraced and banished to Brittany.  In 1637, Louise took up residence in the Convent de la Visitation where Louis visited her for some months. 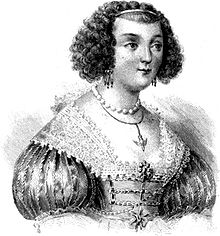 Anne, still ignored by Louis, felt ever closer to her family and friends in Spain after the war. She visited the Abbey of the Val-de-Grace where she would write letters complaining about Richelieu to the various enemies of France. In the summer of 1637,  Anne wrote a letter in code to Marie de Rohan, Duchess of Chevruese. The bearer of this letter La Porte, who was her valet-de-chambre, had already been examined by Richelieu and threatened with torture. He did not betray his mistress but was none the less intercepted.

Later, Richelieu visited her seeking a confession which she, overwhelmed, signed. She was then given forgiveness by Louis and a list of requirements for her conduct. She was to visit no convents and write no letters, her maids being set as guards over her. It did not stop there. Anne, ill with fear, was again examined by Richelieu’s own court examiner and the Abbey was searched for further papers. Nothing was found, the Abbess was devoted to Anne. At this point, the Queen was ready to flee to Brussels, taking Mademoiselle de Hautefort and the Duc de Marcillac but without evidence, Richelieu could go no further.

Eventually, Anne and Louis reconciled. Madame de Chevreuse was exiled and Marie de Hautforte returned to court, maintaining her stormy relationship with the King and her friendship with the Queen. Richelieu however, was not so easily put off . He knew that de Hautefort was a danger to him , being friends with his former enemies, Monsieur, the king’s brother and the Comte de Soissons who had already given Richelieu enough trouble.

Richelieu decided to distract Louis with a new favourite in the form of a beautiful young man, Henry d’Effiat, Marquis de Cinq-Mars. Cinq-Mars was sent on a journey with Louis where he could plead his cause;  that de Hautefort could not be trusted and that Louis would have to choose between him and her. Soon Marie de Hautefort was sent on her way banished to her grandmother’s estates not to return until the regency of Anne.