Who were the aboriginal people that the early explorers and immigrants met in New France? In the beginning, around 11,000 BC, depending on which school of archaelogical thought you follow, Asian hunters from Siberia crossed over the Berengia land bridge created during the last Ice Age. That was between Russia and Alaska. They then followed an ice corridor all the way down to Patagonia. When the ice retreated, they travelled back north bringing with them many of the things they had used in the south, such as the corn, beans and squash, the Iroqouis grew.

Routes of the First Americans

The earliest evidence of human existence in Canada is found 10,000 years ago in Nova Scotia,  Alberta and British Columbia. Again, this is using the conservative school of thought which says there must be material that can be carbon-dated.  About 8000 BC, the climate started to change drastically. The ice started to melt and raise the sea-level which covered Beringia. 5000 years ago, the climate stabilized to what it is today and the Bering Straight gained its present width of 80 km. Land animals and people from inner Asia no longer crossed, rather, it was sea mammal hunters and fishers that traded across the strait. Now, the population grew through natural increase rather than migration.

Between 3500 and 2000 years ago, the Mayan society developed using highways and building temples, all with stone tools. The Incas developed irrigation systems and built bridges and roads. They farmed more than 100 species of plants. In Ohio, giant mounds were built in different shapes and large towns were developed. Those people were replaced by the Missippians whose agriculture methods were later used by the Iroqouians. By the mid 15th century the Amerindian population reached 1,000,000 people. Half a million  of these people lived in what was to become Canada. That population would drop by 90% after European contact because of disease.

By 1492, northeastern America was covered by a dense canopy of trees which swept from the frozen north to the swampy south. The soil was rich and fertile. This was the home of the Algonquian people who were primarily hunter-gatherers. They hunted moose, beaver, fish and duck which were often preserved by smoking. Their nomadic way of life required a portable shelter or wigwam. Four saplings were tied together and covered by long strips of bark which were sewn together. Swamp grass lined the inside to keep out moisture. Fir branches covered with moose hides made both floor and beds. Moose hide also provided clothing which was decorated with quills, eagle feathers and shells. They also wore beaded jewellery.

Clothing of the Woodland Indians

The Iroquois people lived on land which stretched from upper New York state and desended on the west to the St. Lawrence Valley, Lake Ontario and Lake Erie. They were known as ” the romans of the new world” and “kinsmen of the wolves” for their savagery. The tribes that arose in the early 14th century in New York state were mutually hostile which in the end, was part of the reason for their decline. They eventually grew and formed a confederacy of five tribes that terrorized the Algonquian and dissident Iroquois tribes including the Huron. By the 17th century, they controlled an area from Maine to the Mississippi River. 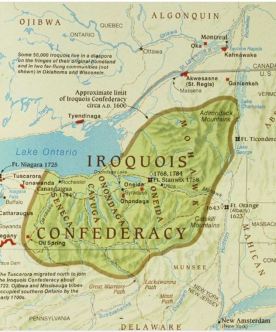