I have just attended a webinar from The National Archives in London entitled “Why Did the Victorians Fear the Workhouse”. The Presenter was Paul Carter the Principal Specialist in modern domestic records. He has a particular interest in poor law records.For this they use software called Blackboard Collaborator. Ear plugs are needed for the audio. You can see film of the presenter on the top left corner and a display board on the right with diagrams etc. On the bottom left there is a message box where you can ask questions. Paul was very approachable and knew his records. You are sent instructions before hand on how to connect to the webinar and it will be reposted on the website at the National Archives.

I wanted to know if Agnes, my great aunt, wife of Alex Fraser, Master of the South Dublin workhouse would have been compelled to be Matron since her husband was Master. It just didn’t seem possible that she could do that and raise a large family. Also, I hadn’t read anything in the memoirs about her actually working there, just some memories of having Christmas teas etc.

The answer was yes with the idea that she might be able to carry on if he died with the help of another man they would hire (This sounded like it was a common scenario). That didn’t happen in Agnes’s case, she apparently had to leave when Alex died. Whether we will ever find out why, I don’t know. BUT again another example of how amazing Agnes was. Matron of the workhouse, mother of 8 children, one of whom was lost in her last pregnancy, adoptive mother to her sister’s 3 children and hostess to an open house for all her family. And she lived to be 104 years old!

The webinar was brief but full of useful information, the diagrams giving us examples of what we might find in the records. This was related to English records but gave me an idea of where I might look in Ireland. The sure answer to my question would be to find the employment registers for the South Dublin Workhouse.

This was an interesting experience! Oh yes, I had to be ready by 8 a.m. because they started at 4 p.m. their time. That took a little figuring.

Violet was the second last daughter of Agnes and Alexander Fraser born July 3, 1899 at Garden Hill like the rest of the children.  Like her other two sisters, she was an accomplished pianist. The family moved to 42 Westfield Road in Dublin along with “Uncle” Charlie Waugh who lodged there for about 20 years. Agnes Fraser had decided to call the house “Feldberg” after the place in Germany where she had met Alex.

Sophie, the youngest Fraser child was born August 20, 1901. Like her sister Violet, she had aspirations to go on stage. She took a job in the engineering department at Guiness Brewery where she spent her working life.  Around 1956, Alex inherited 50 acres of land near Harlockstown in County Meath and the family moved there. Sophie died in Canada in 1989. As stated in another post Alex died at Meath in 1964 the year after his mother.

I have actually been contacted by a couple who now have the house at 42 Westfield Road. People are always so excited to find information like this and I so enjoy hearing from them.

Agnes and her family left the Union and eventually set up house at 4 Kenilworth Park, Dublin. On the night of the 1911 census, all the children except John Henry (Jack) were present, the family playing tag-team to make sure everyone was looked after. Each of the children had their own experience living there, the two central figures being Alex Victor and the youngest girl, Sophie. They both remained single and brought in incomes which helped to keep the house going. At some point after 1930, they would be living at 42 Westfield Road in Dublin which later became known as Feldberg.

Alex, the second son, was born October 31, 1887. After his father died, he became the mainstay of the family. He had attended St. Andrews College with his brother William in Dublin and started out as a clerk in the Paymasters office of the Great Southern Railway, the same place his father had worked as a young man. He went to war in 1914 as part of the South Irish Horse.

Alex and Agnes had 4 other boys. William born 1886, was a builder and built the two houses on Westfield Road, Dublin.. As I said before, money was lost on the project and the second house meant to provide an income for Agnes had to be sold.
Robert (Roy) was born 1893 . He was an ambulance driver during WWI and settled in England after the war.
James Arthur (Artie) born 1895, was a pilot during WWI After the war he became agent for Lord Letterkenny in Donegal.

Below, the Family Register showing Alex and his siblings. 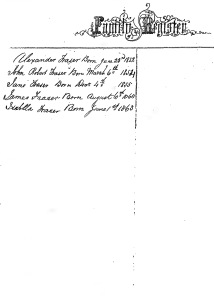 Later in life, after Jean’s death, Robert went to live with Agnes and Alex in Dublin where he and William would engage in heated discussion over the Sunday sermon at Adelaide Road Presbyterian. He died in 1905. The James Fraser above married Sarah McDowell, Agnes’ sister. So, two brothers married two sisters.

Next in line, was Agnes, second youngest of William and Sarah. From the start, we get a sense of the type of character Agnes was. Bright, adventurous, courageous and disciplined. The same character that would get her through the life she would lead with Alex Fraser, her husband.
It goes without saying that like any father, William wanted the best for his girls and supported them in their pursuit of happiness. As we have seen earlier, William was an athletic and competitive person himself. He  encouraged his daughters to be the same though a few of the girls had more of their mother’s temperament  and preferred an early marriage to rambling around the world.
All the McDowell children were educated by the good Reverend John Holmes at the Presbyterian Manse in Tipperary Town. Some of the children came in the new horseless carriage, but many came in horse and cart. The McDowells rode in a donkey cart the long 5 miles in the warmer seasons and boarded during the winter. Agnes became good friends with Emma Holmes, the Reverend’s daughter whom she later travelled to Europe with.

At that time, women were not allowed to enter university but could obtain a “Certificate of Fitness to Teach”. Agnes wrote the university entrance exam and passed which of course made her father proud. For this, she received an engraved watch with her initials on it from Reverend Holmes and was then sent to finishing school in Dublin where Alex Fraser commenced courting her.
Agnes then took up a position as governess in County Armagh to a widower’s two daughters. She was very well liked by the family and eventually was proposed to by her employer but she wasn’t ready to settle just yet. She asked William to send her to Germany to study the language He set her up with a German employer in Friedrichsdorf. This was an idyllic time for Agnes and she spoke to her children and grandchildren about it often.
Eventually, Agnes decided to become engaged to Alex Fraser who was some 10 years her senior. This decision made, she headed for home. By this time, he had  won the position of Master of the South Dublin Workhouse, having started out working in the Storehouse. As a young man, Alex became involved in a court case against the supplier of milk to the workhouse who was selling them “adulterated (diluted) milk”. From “The Analyst” dated January 13, 1881.
“In the Southern Divisional Police Court, Dublin, James Grennan has appeared at the suit of the Guardians of the South Dublin Union, who alleged that he sold and delivered milk at the Workhouse which was adulterated with 20% of water. It appeared that the defendant was one of the contractors for the supply of milk to the Workhouse and Alexander Frazer, store-keeper of the Workhouse, demanded one gallon of the forty-five gallons that was being delivered one morning at the Union. This he had analyzed by Dr. Cameron who certified to 20% of added water. For the defense, it was stated that the contract had been from the beginning executed by a dairy keeper named Collins who had failed in getting the contract from the Guardians. Collins received all the money paid by the Guardians. It was also urged that inasmuch as Frazer did not pay for the milk, he had not complied with the act of parliament. The magistrate held that the Act had been complied with and fined the defendant 10£  with 2 guineas court costs and refused to state a case.”
One could certainly take this as an illustration of not only Alex’s character but his determination to rise to a position of some control, perhaps where he could do the most good.

In 1885, Agnes and Alex were married by the Reverend Holmes and commenced life at Garden Hill, the house attached to the grounds of the South Dublin Workhouse. Their life together would begin.

Leaves In the Wind
Blog at WordPress.com.
Loading Comments...